An amazing thing happened this morning. For the first time ever, I finished a 5K training routine. What began in August as a way to pass time during a month-long break actually sort of became an obsession. I get it now. I smell worse and feel better than I have in years. Running? Let’s be pals. You’re addictive. You’re great.

I’ve got to hand it to Zombies, Run! for achieving the impossible, by which I mean convincing me that voluntary physical activity is, in fact, fun and rewarding and not just something you should do because of crushing societal pressure. And while I hesitate to call this a journey, just because of the horrific cliche, there have been some stunning highs and hilarious misadventures along the way. (Lesson learned: If you buy a pair of running tights online and they feel like they might fall down, don’t try and run in them anyway.)

I thought I was going to make this post on Monday, and I did in fact have a really amazing run two days ago. (Forty-two minutes at a pace of 10:16, what! Who am I, and how did I come to brag like this?) But the final ZR 5K mission is deceptive: it seems to end nine minutes before it actually ends, so runners: once you do the thing, don’t stop the app. They don’t really tell you to run or walk or just stand there wheezing, but just. Wait for the little voice that says “Mission complete!”

That said, I’ve been embarking on an experiment since my last post about running. I wanted to see if I could see changes as I progressed through the program. I’ll let you decide if that’s the case. Without further ado, I hope you enjoy (and laugh at/with) this gallery of selfies taken at the end of each run since September 1. Myself, I’d call it a decisive victory!

The face that launched a thousand more faces.

Aw yeah, totally got this in hand. 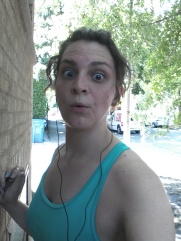 I get so pink when I run, it’s amazing.

One of my most attractive faces. 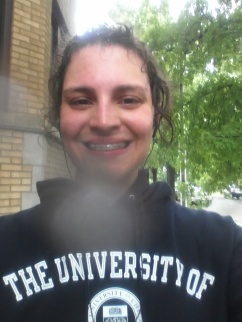 My first run in the rain! 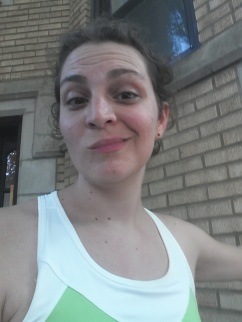 Post-run smug is such a good smug.

It doesn’t last long, though. 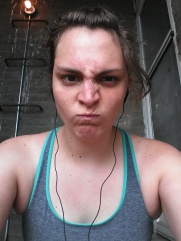 The day my phone glitched and I lost my run data 10 minutes before the end.

Check out who got her braces off!

I think this was the day they introduced skipping into the regimen.

SAM YAO, I WON’T LET YOU DOWN.

OH NO. Don’t stop early! (Even if you can’t really run anymore!)

Friday it’s off to regular missions. Abel Township, here we go! Again, I can’t recommend Zombies, Run! enough — even if you don’t like zombies, and especially if you don’t like running. (And another plug for Yurbuds, seriously: earbuds that don’t hurt and don’t fall out make everything better.)

Okay. That’s definitely worth some celebrating. Happy Wednesday, all. Runner 5 out!

4 thoughts on “Seven weeks of selfies and I outran zombies too.”