I earned a master’s degree in Magazine Writing and Editing from the Medill School of Journalism at Northwestern University in December 2013. Right now I’m happy to be working as a copy editor and sometime writer for Mic. You can find my stories, including short news articles, opinion essays and listicles, at esther.mic.com.

I am an experienced editor and web producer, with a strong background in print reporting, creative nonfiction and personal essays, in addition to photo, audio and video reporting. I have a particular interest in long form journalism, as well as interactive and digital storytelling (relevant skills: HTML, CSS, jQuery, Javascript; Adobe Photoshop, Audition and Premiere). You can visit my portfolio site at EstherBergdahl.com, which I built and which runs on WordPress.

I maintain a Tumblr for analyzing media about journalism, sharing great stories and encouraging media literacy: J for Journo.

Scroll to the bottom of the page for my resume, or click here. Please feel free to get in touch at estherb@u.northwestern.edu.

My dad, the mensch (JUF News, February 2014)
He was calling to tell me my mother had just died. Ignatz, as she’d named her brain tumor, had finally taken her from us.

I reported on veterans and military families in Chicago for the Medill News Service from April to June 2013. For a full list of those stories, click here. 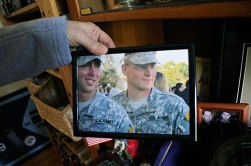 Military suicide epidemic compels survivor families to speak out (June 6, 2013)
U.S. Army 1st Lt. Danny Weiss took his own life in March 2012. His parents, Andy and Julianne, are determined to confront the issues of mental health and suicide risk among veterans, especially given that, according to government statistics, 22 veterans commit suicide every day.

Hope for homeless veterans in Garfield Park, Englewood (May 21, 2013)
Hope Manor is a West Side housing facility for homeless and at-risk veterans. While many residents credit the program for turning their lives around, some residents and outsiders are worried about Hope Manor II, a new project that has just broken ground in Englewood, said by some to be an epicenter of the self-destructive behavior these veterans are trying to escape.

Warrior artists explore art therapy for veterans (June 5, 2013)
Veterans and art therapists are working together to formulate new counseling programs using creative arts therapies outside of the VA system. The School of the Art Institute of Chicago and the Albany Park Community Center have just completed the pilot year of their VetCAT program, using a variety of approaches to bring veterans healing.

VIDEO: Veterans eager for Illinois marriage equality (May 2, 2013)
Same-sex marriage is likely to come to a vote in Illinois as soon as next week. For gay veterans, this could mean spousal recognition that affects federal veterans benefits. Many have set on a larger goal, though: repealing DOMA, the federal Defense of Marriage Act.

Marriage equality a stepping stone for Illinois veterans from Esther Bergdahl on Vimeo.

View this document on Scribd