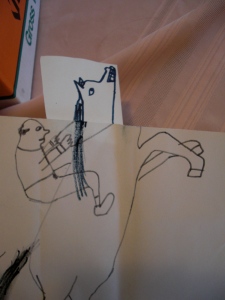 I think The New York Times has finally published the saddest headline I’ve ever seen: “Effort to Restore Children’s Play Gains Momentum.” Reading the article is hardly better. Has the United States grown so dystopian that we have to lobby schools for recess and teach our kids how to build couch forts? I tried to justify it away by reminding myself that this is The New York Times, and this article is very much focused on a certain socio-economic subgroup of Americans. Still, all too many times I’ve seen parents schedule their kids to the point of impossibility. Who has time for kids to play anymore? A lot of things depress me about the state of the world, but this one is pretty high on the list.

The tab containing the article has been open for several days now. I keep looking at the headline and shocking myself that it exists all over again. My parents were always fervent about keeping me engaged and creative: if I wasn’t reading, I was making art, or playing piano, or riding my bike, or keeping a nature journal, or trying to draw, or writing a story, or playing with a friend. I never had “playdates”: when the impulse struck or when a plan had been made at school, I asked my parents if so-and-so could come over, or if I could go over, and we’d play. Otherwise, I’d do my own thing, and be perfectly content to do so. All that unscheduled playtime, all that room to govern my own imagination, was a constant, integrated feature of my life, and it’s one of the greatest gifts my parents ever gave me.

The stories that horrified me the most, as a kid, were those of the adults who had forgotten what it was like to be a child. It was almost always a plot point or a character flaw, and it usually made them either villainous or tragic. And kids, of course, can always spot a grown-up who speaks their language: they make the best allies and supporting characters. From a very young age, I was determined to stay in touch with that part of myself. I would always know what it meant to be a kid, and I never bought any of the excuses the harried, lost grown-ups had for their implacable adulthood.

I found myself thinking of this more and more as I began putting together this blog, after months and months of mulling it over. I agonized over what my angle would be, how I would package my unique voice and/or product, how I would set up my website and on what schedule I would update it. I was so relieved when I settled on the simplest version, that I would do one personal essay and one creative response each week. Great! I thought. My system will work! I’ll be reliable! I’ll start this week!

Nothing happened. I was paralyzed by the idea that I would have nothing to say. Maybe people wouldn’t be interested in weird magical realist vignettes. Maybe my burgeoning urban fantasy wouldn’t be worth reading. Maybe I should start with literary fiction about ironically angsty middle-aged hipsters yearning for fulfillment in unironically non-mainstream ways — then the Internet would pay attention. Maybe I should find the perfect gimmick and write entirely on Twitter or Tumblr or FourSquare or something.

I’m getting bored just writing about those anxieties.

This space is about play. Present Self, take a hint from Younger Self and just do what you want. I hope this turns into a space of wild, reckless experimentation. The deadlines are there to force me to accomplish something: with a deadline, I am prouder than inertia. There is so much to try, and I am excited to try it: magical realism, hard sci-fi, alternate histories, fake mythologies, horror, humor, satire, comics, children’s stories, scripts, videos, sculpture, collage. (The one thing I can pretty well guarantee won’t be in here is poetry, though I hope one day to break that promise.)

There’s a motivational graphic out there somewhere that I’m trying to take more to heart: Stop clicking refresh and go & live your fucking life. I’m also a fan of Get Excited and Make Stuff, one of my favorite reworkings of the famous Blitz poster. At some point in my life — and if I’m honest, it roughly coincided with my discovery of the Internet — I became a person to whom at least one of these needed to be said. There was so much Terribly Important Stuff going on: college and jobs and independence and other people’s lives. When you’re little, you never understand how people can lose sight of something as fundamental as play. It turns out that when you need to start performing, play has to make room for work, and work can be a greedy beast.

Still, if work gets too greedy, I know play with always have my back. Hopefully it will for those kids in the article too. It should. Play is stubborn. Given space, I think it’ll do just fine.

1 thought on “Verbs are action words”